Dionysian - Representations of the Id (2019) 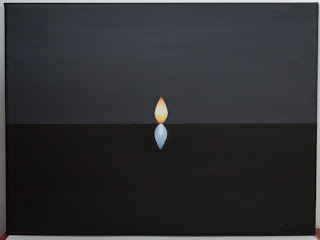 Expanding our knowledge of one of the less-covered countries' metal landscape is always a pleasure, and it's that much easier to do when the bands share some link with one you already know. Consequently, when we found out that the bassist of this Malaysian sludge/doom group is none other than Trishay Trada (of Ksyatriya, whose every release we've covered), we were eager to check them out. Boasting four main songs, each around the quarter-hour mark, followed by a cover track to close, this debut album carries itself with intriguing style and confidence before the music even starts.
That confidence (and length) is reflected in the song titles, leading with “As Your Gentle Hands Were Bedding My Lifeless Body in a Dark-Blue Crenmore Seraphim”. After a few moments of rising background noise, light percussion and guitar twangs burst out into full life, meeting thick bass waves with bold drumming, and launching the guttural vocals and intricate guitar-work once the foundation is well set. Much of the remainder is instrumental, focusing on the twists and tangles found in deep-dive riff extrapolations, but the selective application of the vocals brings an extra punch and immediacy to their presence.
“Capitulation to the Word” follows, using a number of the same techniques, but also finding room in its bridges for more intense runs from the drummer, which the guitarist and bassist weave around compellingly. There's also some cleaner vocals introduced, which counter-point the overall increased aggression of the song when compared to the opener. And as with that first track, the band shows a remarkable skill in making these sizable songs run so smoothly that they almost feel shorter than they truly are. With “A Madman's Dream of a New God-Era to Become True”, they switch things up, moving to a jazzy fluidity on the drums while pluckings of an acoustic guitar ring out under the impacts. The heaviness inevitably resurrects, of course, but with that stretch of lighter tunefulness (which does get some return installments throughout the song), its crashing arrival comes that much harder. Amid the switching between those two modes, the song eventually fuses them, holding the intensity while moving faster and freer.
“Where the Statue Meets the Shore” is the last of the core songs, opening its run with a meditative exploration of echoing strings punctuated by the drummer's percussion. As the song continues, it revisits approaches from each of the other songs, combining them in new and intensified ways. Leading through those numerous turns and meldings, it builds to an impassioned climax, marking a fine finish to the band's first set of songs. With the original attributed to Aleksandar Sariesvki, a cover of “Uci Me Majko, Karaj Me” puts a cap on things. While it certainly sounds heavy, checking the digital liner notes shows it to have a humorous side, as it sings of a marriage with an absentee bride. Dionysian perform it with a strong sense of the character they'd established in the preceding songs, and while it serves as a ramp out of those songs' fervor, it also shows the band's capable handling of more compact material. A strong showing throughout, and an admirable first release.
~ Gabriel

Dionysian - Where the Statue Meets the Shore (320 kbps)