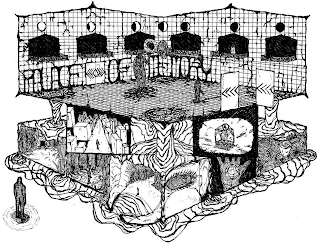 It's been a while since we've heard from the MIND READER project (last time was back in 2014, on theirsplit with Ksyatriya), and while the duo has dropped the (((O))) stylization from their name, they've only grown more adventurous with their track titles. But, as this is the band's first solo album, and it's been cooking for so long, why not pull out those stops?
Opening with the ~10-minute “Autonoetic Consciousness - Lost in the Cave of Memories - [ Sub Level ]”, MR show changes from their more drone-inclined past work, leading with thick waves of bass and a few trickles of percussion before a hooky riff rises into action, bringing the drum activity on up with it. As the melody moves forward, it turns to a slower, more somber mood, while keeping the bones of the original riff recognizable. From there, it's a series of twists between the two mood extremes, finding ways to keep the exploration fresh and lively while maintaining heaviness, and it flows right into the next portion, “Confronting the <I>mposter - Transmutation SimBIOSys (Simulated Basic Input Output Systems)”. Here, things take a turn towards more traditional doom, with elephantine chords progressions and shambling beat spacing, somehow making the weighty riffs practically groove.
“Transmissions of Subjugation - The Horn of Ammon <| The Beacon of Ahamkara |> { Battle for the Horn of Ammon } Part-1” takes us into the second half, riding right off of the reverb trailing from the previous track. While it holds on to the bass emphasis, the drums slide up to a more prominent position in the song-writing, tapping into some storming energy around the midway point. That energy gets brought to a head in the final section, “The Illusion of the Mind - Quantum Mechanical Observer - { Battle for the Horn of Ammon } Part-2”, which grinds harder and angrier than any of the previous segments, and crashes its way into a satisfying crescendo before turning to a protracted finale of feedback, with a quick capper of rainfall and slow strings to guide listeners out of the experience.
For a first album (and one five years in the making), it's quite a fun trip, with plenty of thought evident in the paths the songs travel. As it's essentially one long track, you'll want to set aside some time that you're sure won't be interrupted when listening to this, as it does a good job of pulling you into the momentum and flow. Those looking for solid and ambitious doom metal, check in here.
~ Gabriel