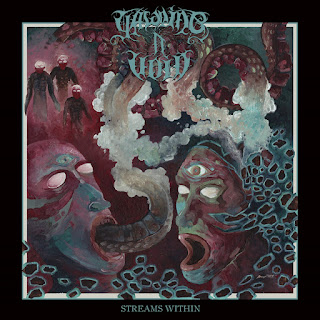 Following up on a couple of advance singles released last year, the Finnish group of Yawning Void have emerged with their first full album, and while it first popped up on a limited cassette run from Kuolema Records back in January, they've recently received a CD release from Weird Truth Productions, giving them some wider exposure.
The first of the album's five tracks (all of which run over seven minutes) is “Hearts Like Abyss”, which leads listeners into the band's black/death/doom cocktail with an enticing ear-worm of a lead riff. The vocalist (credited as K.T.K.) shows off a good rumbling growl and satisfyingly harsh roars, while the rest of the band brings in some tight support for that hooky riff, quickly digging down to that heavy reward. “Melaina Kholee” follows, broadening out the heaviness from the riff (though it does feature a solid one) to a more rounded song-writing approach. Things are kept slow and sloggy, but it moves with a deceptive swiftness for its length, and wraps its run up with surprising neatness for such a craggy piece.
“Ouroborean” takes central spot, contrasting the harsh vocals (taking overlay in the mix) against some almost gentle melodic highlighting, while the following “Kalmoranta” brings the harshness over to the instruments as well, with some organ-like keys providing the cleaner counter-point to the fuzzy feedback. Wrapping up with “Aequor Benthic Bodies”, Yawning Void push their way through a thick atmosphere of dread and regret, leaving an aftertaste of earnest and committed doom. Not too shabby for a first album, and considering the striking knack of the band for crafting memorable riffs, I can't wait to hear where they grow from here.
~ Gabriel

For Fans Of; Deathbell, Heavydeath, Jupiterian, Major Kong, Shrine of the Serpent