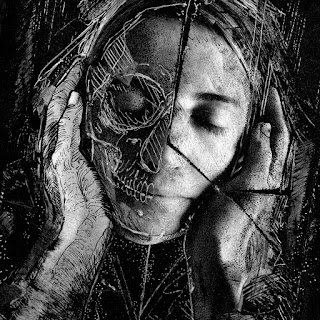 Almost half a decade after the release of their previous album, Dust of This Planet, the Brooklyn-based Matte Black band is back again, with right around half an hour of new material. Leading off with “Isolation Under Glass”, the band show themselves to be occupying an uncommon intersection of doom, alt rock, post-punk, and fuzzy heavy rock, with a bit o' grunge and desert rock for good measure.
Melodies are compelling, the weight is authentic, and psych-inclined tangents swell up smooth and cool. The retro vibes are unforced, and blended with modern vibes enough to neatly dodge any sense of retreading. It's arguably not even homaging, just the result of picking out flavors that work best for the songs. A light salting of samples throws further variety in the mix, and as brief as the overall album is, it gets great mileage out of the riff explorations and vocal escalations.
If my impressions seem a bit choppy, that's because this is one of those albums where once you put it on, you just want to ride along with it, and not pull away for other activities. All of the influences melt together in creative ways, and gliding along with their shifting currents is mildly hypnotic in its way. From the start all the way on to “Gone”, the final track, the band provides a damn fine experience, wowing while keeping their vibe casual and chilled. Take some time out of your day to check it out for yourself, and once you've found yourself putting it on a few more times, throw some cash to the band for a copy of your own.
~ Gabriel