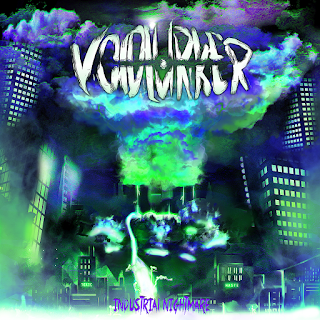 Following up on their 2018 demo, the three-piece of Voidlurker have returned with just under thirty minutes of material on their debut EP. Leading off with the ~7:30 title track, the band rolls out some thick and heavy sludge. Slow-grinding riffs, dirty vocals, and flexings of acerbic aggression give the song big flavor, with a ramp into higher tempos at the end helping it to break out of the swampy slog. “Jeffrey Doomer” follows, keeping some of that higher tempo in play while solidly sinking itself into the low-end. Craggy chord progressions and rolling break-downs inflect things with a bit of groove sensibility, while keeping a hazardous vibe well intact. A kick-out riff in the last minute of the song again punches things up, and paves the way for the third track, “Rotten Seed”.
After a bit of low-key intro fun, the song bursts out into wider and more reverberant presentation, growling away with a touch more feedback to the fuzz. The growing heaviness of the riff is emphasized by the gradual slowing of its playing, letting listeners really feel themselves getting dragged down along with it. Despite that, for an eight-minute song, it carries itself well and doesn't make you feel as though you're waiting it out. Lastly, “Bitchcraft and Misery” brings out the snarling attitude in stronger force, hitting some hard combos of drums and guitar for a nasty impression.
All together, the trio have put together a solid first studio effort, and show proficiency in a wide enough range of sludge forms that it'll be hard to predict just what their next one will sound like. Here's hoping it emerges before too long, and keeps up the quality they've put forth so far.
~ Gabriel