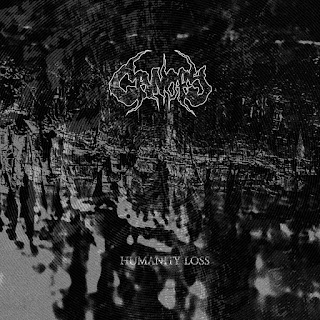 About a decade in the making, Canopy's first album follows a demo and a pair of EPs (which we covered here and here), and capably demonstrates that the band has been honing their material over all that time. Delivering just under fifty minutes of material across the six tracks (with the two-minute intro track, “Intrusion”, easing listeners into the experience), doom and sludge are stirred together for a heavy dose of suffering, and the results are superb.
The two-part “Hostile Architecture” follows the intro, operating in a largely instrumental fashion, though some screams and howls are used to punctuate the chilly vibes. Strong bass riffs and drums to match are contrasted with the scratchy highness of the guitar's tone, and a couple of spoken samples appear in distorted form to give things extra flavor.
Once that first chunk is concluded, it's on into “Exigent Weight”, which lines up a slow-grind ride with some surprisingly poignant strains from the guitar slid into the agonized atmosphere. The vocals take a more forward and distinct role with this song, but step back again to let the climax rise and strike in full power before rejoining the instruments. Sharp song-writing keeps things intense and stimulating, while the production hits a nice balance between clear and swampy presentation.
“No Cure” picks up from there, going deeper and heavier, and delivering a strong sense of immersion with the coiling echoes of the guitar-work. The vocals ride the swell and fall of the instrumental momentum with very effective poise, snaking in with a howl there or injecting a rasping scream there, always punching the energy higher. Lastly, “Adrenochrome” steps in with a slow-building ramp into action, escalating to hard-slamming rhythms and a final burst of expression. Excellent work throughout, and though it's a digital-only release for now, here's hoping that they find a label savvy enough to put them out on physical media in the near future.
~ Gabriel