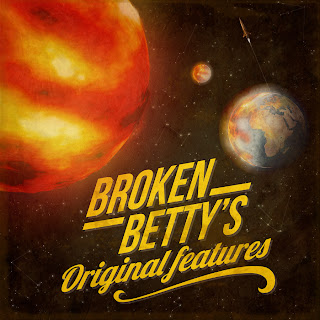 You must admit, when you think 'desert rock' your mind doesn't instantly make the connection to Poland. In fact it's probably so far down the list it's next to 'Gandhi' or 'Beef stroganoff'. But as everyone's probably noticed over the last few years the genre has somewhat gone pandemic. Leaving the dusty realms of California to spread far and wide, reaching some deep, dark and truly unexpected locations. So these days when it comes to the genre and eastern Europe there are fewer better acts to look at than the trio of Poles that make up Broken Betty. Their simply titled EP blew our hair back when we discovered it last year so when this arrived it was thrown straight on with eager anticipation.
Once again I'm glad to report that the guys have fallen far from letting us down. With slightly more edge and a noticeable increase in 'thump' from their debut release the album serves as a pretty good showcase on just how the guys have improved and developed their sound over the last 3 years. Along the lines of their second release The Sorry Eye its little more metallic but has still retained a real heavy desert feel. This time around though there are odd smatterings of what really remind me of 90's punk. Namely Bad Religion, especially with the opening track Bastard Rocket which sounds like a clash between the aforementioned and Fu Manchu. Hey, it works just go and have a listen. The whole EP is in fact riddled with unexpected elements all brought together in a sort of ferocious musical alchemy. Space rock fuzz and feedback coupled with almost grindcore like vocals on the track Everybodyshitsonmtv then closing with a post metal  ambiance that blends into a classic rock, almost Sabbath like affair. There's no doubting it not only works, but it's bloody awesome to boot. I can't see any reason why the guys couldn't keep this up for a full length album, which they really need to now do because I'm now dying to hear more!
Being the good sports that they are the boys have let me offer up a track of my choosing for a free download below. As always though go show them some love on their Bandcamp page. They're not looking to get rich just simply cover the cost of the recording, and at just $2 for the whole EP it'll hardly leave you broke. Besides, it'll be the best couple of bucks you've spend in a while I assure you!