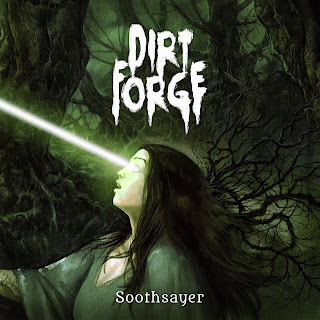 Hailing from Denmark, Dirt Forge are a fresh new band making their debut with this album, packing a solid forty-five minutes of sludgy doom metal (including a three-part title track) into the spaces of Soothsayer. There's some upbeat aspects to the music, mainly in the hooky melodies that are threaded throughout most of the songs, but on the whole, the music comes out swinging low and hard, with the vocalist's growls nicely complementing the snarling guitar and head-bash drumming.
By the time the band hits their second track, “Fortress Burning”, they're well in swing with the beats and grooves, with the thrashing and chord-clawing fitting together in a nasty mash which hints at some death metal fondness in the members' tastes. It's not high-flown metal; there's few trips through complicated time signature switch-ups or multi-part arpeggio solos. But the meathead vibe works well with the brutal flavor of the music, and there's more than enough unexpected inclusions to make clear that there's intelligence behind the slamming. As the trek continues, lyrics of death and despair filling it out, there's a firm sense of the affection this band has for the music and its history, and their homage pays off with some tasty riffs and hellacious howling. Check it out if you've been hungering for some mean metal with a low-end emphasis, and keep an ear out for more to come from these Denmark doomsters.
~ Gabriel