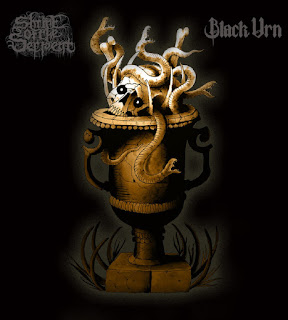 When we last heard from Shrine of the Serpent, it was with their debut EP, back in 2015, so it's nice to see that the band is still going. They've resurfaced to do this split with Black Urn (a band new to me personally, though they've been around since about the same time SotS started), with just over half an hour of material between two tracks from each band. Shrine take the lead with “Desecrated Tomb”, a grim piece of exquisitely heavy doom spiked with sludgy feedback on the strings and a gurgling rasp on the vocals, drums pushing back against their near-burial in the low-end resonance. Snarls of melody claw out from the persistent pressure of the thrumming strings, generating a pull that's hard to resist and effectively drawing listeners along into “Catacombs of Flesh”, their second contribution to the split. The catacombs bring a bit more of a death metal influence to bear, though it still has that near-funereal doom feel of being submerged underground with the weight the band brings to bear, and SotS burn hard until the end comes with a decisive impact.
Black Urn's half of the split brings cleaner tone for the strings, with the finger-slides audible and emotive in their opener, “My Strength Lies Within Heavenless Plains”, which amplifies the funeral doom vibe before bringing the death back with a crash and violent escalation. That rage carries on through the rest of the track, never falling back into restraint until they've exhausted themselves. And when that time comes, it's picked up by their heavy sludge cover of Alice In Chains' “Junkhead”, the lyrics turned into unintelligible rasping howls. After hearing the laughable 'doom' cover of Pink Floyd's “Money” from Doom Side of the Moon recently, it's refreshing to hear a doom cover of a song that doesn't drop the ball, and while it would have been fun to have some of the original's harmonization for the choruses, Black Urn bring a strong sense of non-faked character to their rendition.
Between the two bands, it's a damn good time for those of you who like your doom dirty, kind of depressive, and heavy as fuck. General advice of not operating heavy machinery while using this applies, but if you do, be sure to play it loud enough to scare anyone in range of your vehicle's speakers.
~ Gabriel