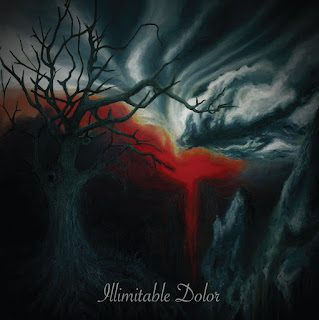 Making their debut with this album, Illimitable Dolor are an Australian band, spun out of The Slow Death to pay tribute to the death of their vocalist, Gregg Williamson. Furnishing a solid modern doom base with touches of death metal in the vocals and gleams of funeral doom in the pacing, emotion, and understated melodies (plus the organ-styled keyboards), ID have put together an album that's fully self-contained while also offering appreciable depth of content.
Though there's plenty of time given to the guttural vocals, the band builds atmosphere and follows riffs through numerous instrumental passages, allowing the somber mood to mature, seep in, and affect listeners' own emotions, assuming they're giving the music the attention it deserves. It's one that's tough to analyze, being suited more to simply being soaked in as an experience, but that's not to say that ID slump any on the song-writing front. As they and their instruments groan through the album's course, there's a broad slice of the metal spectrum explored along the way, made more impressive by how firmly each style is slotted into the music. It's an album well-suited to use for delving into your own depression, or for riding along with the band through theirs. That the songs can linger on in memory on the strength of their tunes is a plus, and hopefully the group will continue on to create something pursuing the melodies, without their grief holding onto them quite so tightly at that point.
~ Gabriel