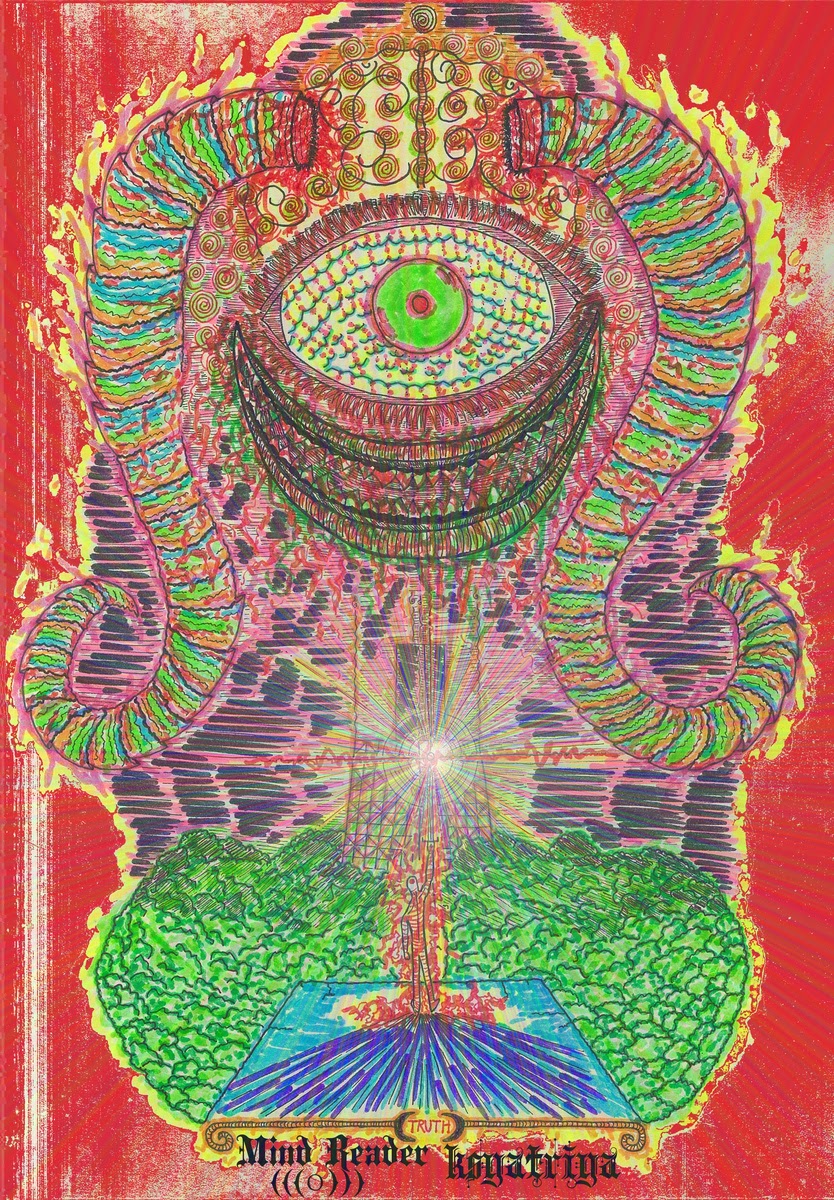 This split brings together the Australian doom duo of brothers Rahul and Trishay Trada as Ksyatriya, and the more drone-inclined and mysterious duo Mind (((O))) Reader, from Kuala Lampur, which also features Trishay as half of the creative team, alongside an individual named eXile.  Together, they provide one serious space trip.
Mind (((O))) Reader's dronier side starts off the journey with a strong cosmic sample, and lays down a few more in the slow and massive stretches of feedback and resonance which follow it, all of them integrated fantastically into the structures of the songs.  Excellent tonality and wave-shaping reinforce the psychedelic imagery of the artwork and song titles, while the addition of some thunderous drums really galvanizes the proceedings and brings a titanic sensation of power and force pouring out of the speakers.  As their half of the split continues further, some of the buzz to the guitar is burned away, while the tunes get tightened up and generally faster, adding to the sense of progression towards some higher plane.  Though that spine-tingling humming edge to the strings is never fully lost, everything grows to feel sharper and more direct.
As Ksyatriya pick up things on the second half, with an approximation of a deep-space vacuum, they build on the momentum generated by Mind (((O))) Reader, using the pre-developed tension to underline the menace of the leading guitar-work before the bass slams into place.  That menace is held onto as they carry out the rest of their songs, with a hard and low-pitched sonic edge that digs in deeper and deeper.  They also make use of some excellent audio samples, mixed in organically and very effectively.  After some high-power musical violence, the cosmic hum resurfaces towards the end, washing over everything and draining everything into a black hole of sound to close out the voyage.
The split in its entirety is a fairly large undertaking, adding up to one and a half hours of heavy reverb and transformation, but it's also an incredibly rewarding one.  There's an enjoyable sense of structure to the whole thing, something rarely found on splits, and the degree to which they develop it puts most concept albums to shame.  The band has mentioned that a physical release might be in the works, so we'll be keeping an ear tuned for more on that.  Until then, you can pick up each part at the bands' respective BandCamp pages.  Do it!
~ Gabriel