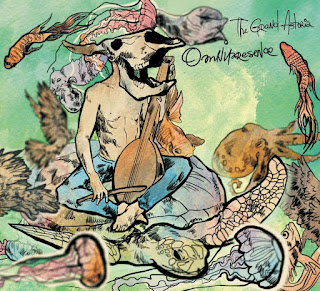 Once again we find ourselves in Russia, Saint Petersburg to be precise. I was a bit of a late comer to these guys so regrettably their first few offerings passed me by. But nevermind that, here's their most recent offering.
A weird mix of stoner jams, eerie ambience and occasional punk tones, hell, theres even a little hint of funk in there too. Its a strange concoction, but it doesn't sound that odd. Its in a similar vain to Earth Blow's Rollin' God, in the fact they've seemingly chucked in a little of everything. Its an impressive feat by anyones standards, its not easy putting all those elements into one album and not only avoid being labeled 'for an enquired taste' but actually pulling it off and making something bloody impressive.
Yeah, no everyone would maybe agree with me, but if you like the riffs of Fu Manchu, the ambience of Red Sparowes, occasional funk of The Chilli Peppers and Russian's, give this album ago.
They're also currently on a European tour, so if you're lucky enough to be in France, Spain, Germany or Holland go bloody check them out!
• For fans of; Dozer, Nebula, The Dust Bowl, Deserts Of Mars, Causa Sui
Myspace
Omnipresence (320 kbps)