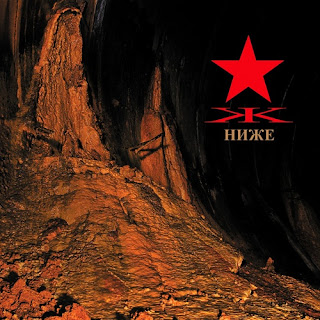 I'll keep this short and sweet as Im majorly jet lagged.
For the last year or so since I first discovered their first album Yepho I just assumed these guys were Russian... Well they sing in Russian and the albums have a distinct Soviet feel to them so I think I can be forgiven for jumping to that conclusion. As it turns out though, they're from Finland... Not a million miles away, granted but I should probably really do more research.
Anyway, the album... Sounding kind of like a hybrid of Emigrate and early Tool Im sort of reluctant to label the whole thing 'doom'. There's constant waves of ambiance and elements of drone combined with a general industrial feel throughout the entire album. The slow churning guitars and eerie vocals will definitely remind you of some of the slower tracks from Rammstein's Sehnsucht album.
All in all very down tempo and ambient but very well produced . Most likely not to everyones taste, but well worth a listen. Check out their website and most notably their great merch.
For Fans Of; Bongmoth, Warchetype, Mühr, Emigrate, Rammstein
Website • Myspace
Nizhe (320 kbps)