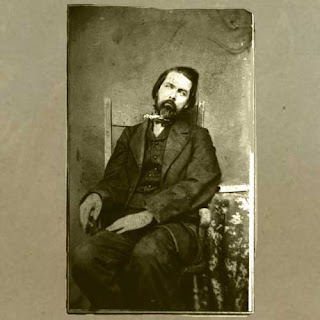 I recently picked up this LP from my local record store. It was casually flung in my general direction accompanied by the words "You'll like this, put it on..." Ok, now Ive been stung like this before, well maybe 'stung' is too strong, but you get what I mean. My mate's judgement is usually pretty good to be fair. "They're like an American Electric Wizard" he added. I should point out now, they're not. Not in the slightest. Im still not sure if he was confusing the record with something else he had tagged for me but either way he was way off the mark. However... it certainly was a find.
The album starts off slow and ambient but quickly explodes into a hail of thrashing guitars and dirty growling vocals. If you were to imagine Isis were locked in a room with Wolves In The Throne Room, I reckon the end product wouldn't be too dissimilar. For a debut release on a relatively small label the sound and production is up there with the best. I could easily see these guy being picked up by the likes of Southern Lord in the future, and if that means the get to reach a larger audience I'll keep my fingers crossed.
Theres nothing in the way of fuzz or grooves and its a bit more metal than what I have/will be posting up, but its a little known gem that really deserves some recognition.
This great little 5 track LP is available from A389 Records and shouldn't set you back more that about 10 bucks. A bargain if ever Ive seen one!
• For Fans Of; Grief, Neurosis, Cult Of Luna, Starkweather, Tragedy