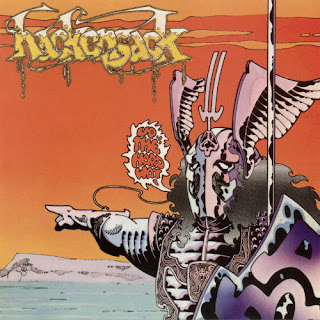 Formed in the UK in 1969, Hackensack were widely considered to be one of the heaviest live bands of the time. Fronted by the beast of a man Nicky Moore, who later went on to front Samson and Ray Majors on guitar who eventually joined what was left of Mott The Hoople following Ian Hunters departure for a solo career.
This album was the bands follow up to their 1972 single Movin' On, and was released just prior to their break up. It really defines the bands tone, their heavy blues influence and rock style producing a sound not to dissimilar to that often associated with the works of Leslie West.
The guys did at the time build up quite a sturdy little following, and in late 1973 Pye Records did record a live album at the world famous Cavern Club in Liverpool. Alas, the recording has never seen the light of day.
Released by Polydor, Up The Hard Way is great little gem if you're able to find on vinyl as theres not been any reissues (except on cd of course). But unfortunately it will cost you something in the region of £60 - £120. Thats if you're actually able to track a respectable copy down.
• For fans of; West, Bruce & Laing, Mountain, Foghat, Free, Samson
Up The Hard Way (320 kbps)