No Rest For The Wicked... 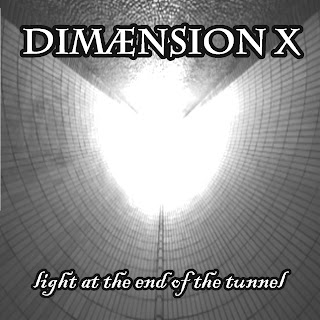 On the back of the great feedback I had with Judd Madden post I thought I'd bring you something else of a simular ilk. Beginning its life back in 1991, Dimaension X is the brain child of Massachusetts resident and all round disgustingly multi talented musician Dave Lanciani. Now the thing about Dave is he's evidently one of fortunate bastards that can pick up pretty much anything and get a tune out of it, and he does just that. But it does kinda make it hard to review his body of work without writing whats basically a dissertation. Playing everything himself, from guitar to the double bass drumming to the synth and even more recently, picking the some brass, Dave has managed to carve out a pretty impressive resumé which is as diverse as it it vast. Hell, just check out the mans discography... Ranging from dark harmonic Vangelis style futuristic jazz to all out traditional heavy metal and industrial feel with a hint of an early Metallica influences. And this album is my pick of the plethora of choices I had to choose from, mainly because it manages to plant one foot directly in both of these niches. A predominantly post rock style affair its still not short of its fair share of thumping drum lines and catchy riffs. Failing that, he's actually remixed and reinvented the Doom II video game soundtrack... Sorry, but thats genius.

I swear this guy must live in a studio because if Dimaension X doesn't do it for you he has no less than 3 other acts for you to wrap your ears around!...
Burn Without Me  - Progressive grindcore with ambient undertones.
Moroghor - Psychedelic black metal
Deadside Manor - Classic kick ass rock/metal

I know! Does this guy not sleep!?