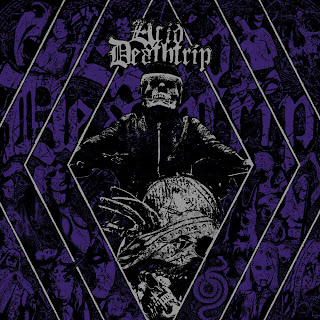 I can only imagine that if Clutch ever got heavily into narcotics and pursued a fascination with all things occult the end result would resemble something akin to Acid Deathtrip. A heavy concoction of dirty, blues inspired riffs, doom infused bass and deep vocal that echoes of tone from a bygone era. Putting all these elements together results in something most aptly described by the band themselves; 'a blasphemous boogie'. Between the occult undertones and the relentlessly unforgiving and impending sense of doom that the entire album produces, it really is the perfect description. If you're still not entirely convinced you can always go by their Facebook description, which states, "getting face-banged by nudist midgets under a pagan moon". Personally, I'd settle with saying that they have something of a early 80's Maiden/Samson vibe to them, but each to their own I guess. There is a certain Bruce Dickinson-ness to Bob's vocal style, which does initially come across as a bit unorthodox, or at least it did to me. Mainly because if you were to take all the vocals away you would be left with something a whole lot closer to Karma To Burn than anything else. But as it stands, you're gifted with damn good mix of both, all set off beautifully with, for me, the best element of the entire recording, the absolutely killer riffage.
The album actually drops on 30th March, and as well as being available on boring old CD, the awesome Reflections Records have pressed a limited number on wax. Totalling just 500, there will 400 on black vinyl and 100 on purple. 50 of those purple presses being offered up in a cracking little die hard bundle consisting of the aforementioned vinyl, the cd, limited edition shirt, patch, stickers and pins. You've not long left and they're going quick so get them while you can over at the Reflections store now!
~ Jay