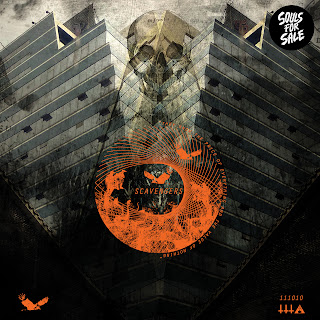 Now, hardcore throughout its violently rapid rise to fame has taken on a variety of guises and therefore sprouted off and crossed boundaries with many other genres and sub-genres. All of which have picked up their little nuances and signatures along route and all of which somewhat fail to particularly thrill me. Ok, that may be a bit of a knee-jerk reaction, so I'll revise. Most of which, fail to thrill me. Sure, a few chosen morsels have slipped through the cracks and landed in my collection, but for the best part the genre as a whole kinda eludes me. Well, the post-punk side predominantly. I think it may be down to all that bloody dancing. I dunno. But like I said, a small select few have always won my approval; Converge, (early) Norma Jean, Unsane, Refused... Mainly, all those that could wield a certain groove, or at least were less discordant that the bulk of their companions. But the genre has always been a mixed bag and varied not just from country to country but from city to city. As a result the boundaries between the genres has become more and more blurred, and no better example is right here with Germany's Souls For Sale.
With all the yield of a nuclear explosion SFS seem to take the best elements of whatever style happens to be flying by them at the time and make it their very own. Be it Slayer like thrash, Melvins esque break downs or a vocal more akin to Chariots, it doesn't matter, these guys can make it work. But it doesn't stop there, with elements that also float in and out of post rock, sludge and doom it's nigh on impossible to really categorise this album, it just feels too varied. With many bands that can often serve as an inevitable downfall for an album, with the final product becoming little more than a confused, disjoined mess. Not here. Even with the occasional presence of samples and the old pinch harmonic, the Scavengers fits and fuses together seamlessly, creating one big ass slab of crushing, unforgiving hardcore metal that sits somewhere between Old Man Gloom's Meditations In B and Soilent Green's Deleted Symphony... It's truly and awesome experience.
Oh, if the eclectic mix of styles doesn't seal the deal for you then head over to their Bandcamp page and check out the first album, which can be yours for what ever price you deem worthy. Not only that, just have a look at the gorgeous wax they've have pressed for both releases. Limited to just a small number of each they're available from the band themselves or Wooaaargh Records, who possess quite possibly the greatest name for a record label since time began. I've picked a copy of each up, you bloody should too!
~ Jay