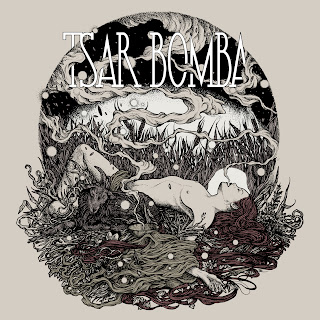 The opening track from this Silent Queen really does perfectly set the tone and feel for the rest of this album in more ways that one. Mainly because when you begin listening you go, "Jesus f**kin' Christ, they're giving this away!?". Yup, no word of a lie, this Parisian trio are asking for absolutely bugger all in return for this absolute belter of a debut! It truly is something quite special.
If you were to take Kyuss in their heyday, and exchange their weed with coke I reckon there would have been a damn good chance they'd have ended up like this. A sort of desert rock Pantera, complete with elements of 90's grunge and a massive dose of fuzz. But the kicker is that its not just chock full of that recognisable desert groove and hauntingly trippy Homme esque lead breaks but that it's all met with a real gut wrenching metal vocal. A vocal which, somehow, manages to fleet between Eddie Vedder and Phil Anselmo within the blink of an eye. It's partly baffling at times, because it feels so surprising in places, but there's not a single second where it doesn't feel wholly satisfying. I don't know how Ced's pulled it off, but it fits in perfectly and works wonders over Fab's crushing fret work. All of which is backed by a drum and bass combo that screams of classic doom. Needless to say everything gels together seamlessly. Whats more, the guys seem to hit the jackpot and have managed to achieve a real tightness that some bands still desperately strive for after a decades worth of albums, EP's and live shows. If this is the end product of just 18 months together then goddamn, I can't wait for the next album. Thats all providing that they've still got a few riff's up their sleeve and don't crack under the pressure of setting the bar so high for album number two. If thats the case then Tsar Bomba are going to be utterly unstoppable in the future.
Easily one of the most impressive releases we've been sent this year, debut albums rarely get better than this.
~ Jay