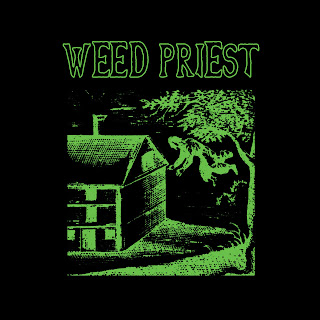 To be quite frank, its a pretty good rule of thumb that any band we get sent that has even the vaguest stoner references in their name are going to be pretty damn awesome. Yeah, I know that's not exactly an infallible conclusion, or even a particularly reliable way to run a blog such as this, but hell, just look our past experience!... Dopefight, Weedeater, Goat Bong, Dopelord, Wizard Smoke, Kamni (Russian for Stone)... None have steered us wrong so far have they? No, and now we have Weed Priest, so the question here really is; have they dropped the ball?...

Pfft, of course not! They're called Weed Priest for christ sake, don't be stupid.

Straight from the deep dark depths of Galway, this Irish trio play what most would refer to now as classic stoner doom. Initially that always strikes me as somewhat condescending, but the more I think about it, the more I realise that that's a load of bull. Every pioneer of this genre over the last 30 years or so have always had one thing in common - their first listed band of influence and one guess who that would be?... Of course, Black Sabbath, and naturally Weed Priest are no different, which pleases me no end! Why? Well in my opinion there are far too many social circles where listing classic acts such as Sabbath or Pentagram, has become something to be looked down on with a sneered venom. Usually by sudo hipster pricks, more often than not with dark rimmed glasses and hoodie underneath a cut off denim jacket adorned with patches of bands they, in all honesty, don't truly admire. I wont worry about offending anyone with that statement, because lets face it, even if you do happen to fall into that visual category you're obviously not one of those kinda guys because you're here. Reading this... and you have passed our test.
Much like these chaps actually. Because while it may not be something entirely new or ground breaking, it is amazingly satisfying and being as there is nothing new under the sun, what more could you possibly ask for? Dirty bass heavy riffs, a healthy dose of sample and a growling vocal that would unnerve Satan himself, all wrapped up in 7 - 14 minutes slabs of groove infused fuzz. The reality is, if you don't love Weed Priest, you really ain't a true stoner/doom enthusiast, and in the words of the late great Leaf Hound Records - "Death to false stoners!"