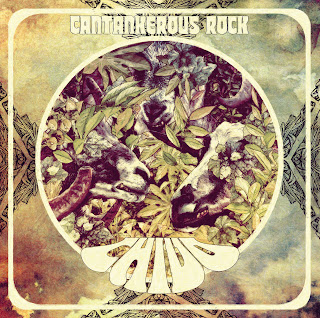 Judging by their bandcamp site, Chivo introduce themselves as a straightforward stoner band and with Cantankerous Rock they do just that, introduce themselves as straightforward stoner. It's first couple of songs are of the heavyness you'd expect from such a band: very solid fuzz soaked rock. Even though very solid, and I can really enjoy me some plain stoner (and I'm sure most of you can too) my interest was really caught when I started hearing the band bringing some grunge in (do I hear some Seether in Feed The Show?) and start playing around experimenting. Swinging grooves and a crazy instrumental parts, check. Back to heavy fuzz, check. Accoustic song, check! This album is made with pure joy, Chivo slap you around with heaviness, grooves, craziness, acoustics psychedelic and back to heavy fuzz again. Never has a band surprised me (and pleasantly at that, too!) with the diversity of songs while still having the album sound like an album, not just a random collection of songs, and that's where Cantankerous Rock excels at. No matter how much I sile some individual songs, the way the album slaps you around with Chivo's broad arsenal is an experience. The 6 bucks charged are definitely worth it, but if you're broke (something I can very much relate to) then be sure to check out their first album, Swamp Of Sounds, which they've put up for name your price over at bandcamp.
~ Ruben

For Fans Of; Kyuss, Unida, Wo Fat, Lowpan, The Shooters