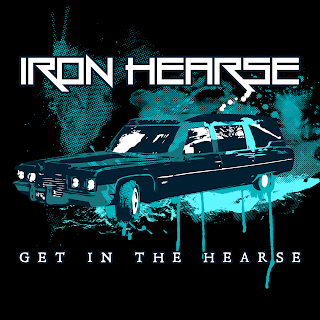 Despite being only their second full length, Iron Hearse's latest release Get in the Hearse sounds like the twelve years of experience this trio have accumulated (Iron Hearse was formed in 2001). Listening to the record you don't just hear, but you feel the synergy pouring through every heavy moment, and heavy moments there are plenty (if not only). All this heaviness doesn't manifest in any aggressiveness though, not at all, it is in fact really laid back. Where the likes of Sleep and Electric Wizard get to be stoner doom on 'roid rage, Iron Hearse maintain the same heaviness except they are lounging, beer in one hand, blunt in the other. The main reason for this difference is that Iron Hearse doesn't have an angry sounding singer, but he sounds like he's perfectly comfortable on a fine sofa. That, or my mind is just playing tricks while I'm perfectly comfortable here myself. Whatever may be true, sure thing is Iron Hearse play very heavy, doomy, and surprisingly bluesy tunes. Yes, very bluesy in fact, so bluesy I don't know whether to call it stoner riff fuelled blues rock or blues rock inspired stoner doom. Either of these may be true, but there is no point in debating, it's bluesy, it's doomy, it's good, and the only definition for it has been made by the band itself by naming a song A Slow & Heavy Ride, and for 2 and a half pounds it is a very affordable ride as well.
~ Ruben