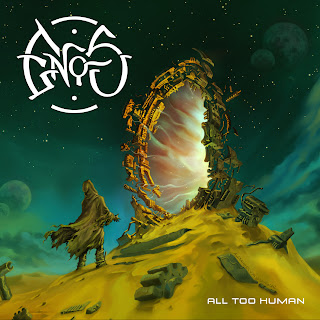 In an attempt to try and get y'all to forgive me for the sparseness of updates last week I'm going to attempt to bring you an update everyday this week. Don't hold me to those words, I am putting the emphasis on 'attempt' there after all. None the less, lets get the ball rolling with some good ol' English space rock...

Now Enos hail from Brighton, the same place as our old buddies, Dopefight and Warwolf, but trust me when I say they are at completely opposite ends of the stoner spectrum. Think, less hardcore bong bashing angry fury and more Cheech and Chong spaced out mellowness. For the most part at least.
Yup, Enos really take the whole space genre and run with it. But instead of just plodding along the same old tried and tested formula the guys have given it their very own subtle twists here and there. Like a smoke entwined mix of Dozer and Pink Floyd. Classic laid back beats, with a nice little modern post rock touch. Predominately a chilled out affair All Too Human boasts some awesome ambient moments, but at the same time manages to be fully capable of unleashing a full arsenal of fuzzy, merciless riffs. It's amazing just how much of a balance this album manages to create, because unlike some of my favourite albums of a similar ilk it just doesn't seem to matter what mood I'm in when it comes to listening to these guys. Everything to suit your mental states is already there, which is great, but most importantly they've managed to avoid making the whole thing overly convoluted or disjointed by forcing in too many elements. All the little touches of blues, southern rock, desert rock, post rock and classic rock all serve to make one hell of an eclectic and memorable mix.
Although there is the occasional element of furious whaling, if you're looking for balls to the wall stoner growling you wont find it here. But if you're crashed out and looking for something to chuck on after Live In Pompeii has run its course then I honestly couldn't think of anything more suitable. Whats more, the guys have actually gone and got a limited amount press on vinyl!... You really, don't have much of an excuse now do you!?
~ Jay