Comets In The Atmosphere... 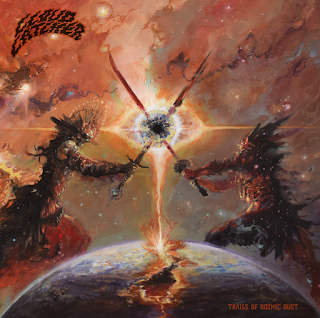 Picking up where they left off with 2015's Enlightened Beyond Existence, the Denver-based trio of Cloud Catcher have returned with eight tracks of fuzzy grooving, hard rocking, and gnarly twist-ups. Rumbling in the low end and burning through crescendos, the band shows a strong knack for infusing their jammy bashes with a sense of direction and purpose more in line with the types of bands who do full concept albums than the smoky bar yellers to which their sound seems to owe so much influence. It's heavy rock with some real life to it, not content to just ride along and retrace the pathways blazed in the '70s, but wanting to cover some new territory of their own, and doing a damn fine job of it.
That's not to say that they don't give some fairly big channels to those older pioneers; “Visions”, for example, is basically a faster rendition of “War Pigs”, and the band bears more resemblance to the heavy psych bands of the late '60s/early '70s than they do to most of their 21st-century contemporaries. As the desert-tinged turbulence bumps along, it does a great job of wrapping listeners up in a warm fuzzy tone-blanket, feeling so reassuring in its tangles of rhythms and tasty feedback that it's hard to imagine it coming to an end. When it does, though, the finish comes with style to spare, and it brings the whole journey to an end that just makes you want t start it over again. The work by the band in putting this album together is just great, and it's one of those where imagining the songs played live, with full room to improvise and spin off into wild solos, makes me practically shiver. Fans of heavy rock, heavy psych, and fuzz rock should all do themselves a favor and check this one out ASAP.
~ Gabriel