Keeping The Light On... 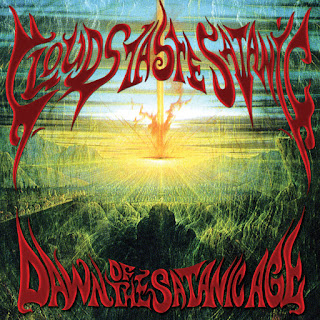 With their third album, the NY-based crew of Clouds Taste Satanic has changed up their cover art style a bit, leaving behind the Renaissance-evoking paintings of religious imagery for a more psychedelic landscape, and altering their music in comparable fashion. Right from the start, opening track “Enthroned” pulls out a more rock-styled lead riff than the band's seemed inclined to use on previous outings, and while they retain a doomy weight to the tones, sustain, and pacing, the exploratory genre-blurring leads them to some intriguingly unconventional places. In other spots, it's faint strains of the band's past post-rock playing that's twisting the bass and drums, grungy tones coating the guitar strings in spots, touches of straight-forward heavy metal swinging heads elsewhere, and proggy jangles of complex riffage crossing various bridges.
It all sounds like the output of a band that's continuing to challenge itself in the process of writing their songs, and keeping themselves nice and fresh by doing so. Going from one CTS album to the next, there's recognizable lineage, but no sense that they're getting bogged down or feeling uninspired. There's liveliness, good grooves, and a sense of storytelling without vocals, and I can't wait to hear what new directions the band will explore on their follow-up. And while there's fun in comparing the albums to each other, CTS have also made an album which stands strongly on its own, especially with the stylish closing of “Demon Among the Stars”. If this is your first encounter with the band, check it out already; if you've heard their earlier albums, there's still surprises in store for you.
~ Gabriel