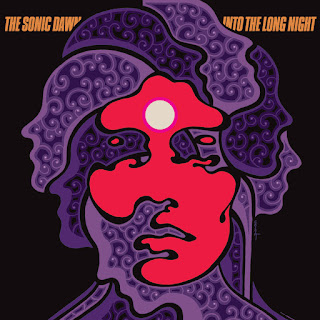 With their second album, the Danish outfit of The Sonic Dawn wades into the older and more popularly-tailored depths of psychedelic rock, as it was in the mid-'60s, with gentle swirls of melody a more prominent part of song-writing than heavy vibes of feedback. As such, there's more than a slight poppy flavor to Into the Long Night, but it's of a form blended with others, so the peppy rhythms and upbeat vocals come out as a tasty groove, not an obnoxious ear-worm.
That lightness of being isn't the only thing TSD have pulled from the '60s, though, as the warmth of production is so on-point it's almost startling. When the vocals get distorted, for example, it sounds passable as something mixed in mono and doubled up into stereo output, with a unity of sonic presence that suggests the band was paying just as much attention to the presentation as to their content. And while a nice wrapping ain't nuthin' without goodies inside, they bring strong substance on that front as well, with the guitar lines and outbursts of drumming charging out full of life, optimism only slightly dimmed by the realities of the age in which we live.
And when the band makes the blues component of their music more overt, as in “Six Seven” (quite possibly my personal favorite), the heaviness and sense of earthy vibrancy really kicks things up, making their sparing use of it all the more effective in its contrast and impact. As the album continues, that side of things becomes more evident in their song-writing and lyrics, with the initial starriness turning a bit more jaded and weighty, the guitar riffs spikier, the electric organ more pronounced. It's an album that holds a full journey within itself, and while the first few songs may put off those looking for something with more punch, those who give the full album a listen should find plenty there (and plenty of variety) to reward their patience. Firm recommendation on this one, those who are fans of psych rock should give this a try and see how genuine feeling for the music will beat affectation any day.
~ Gabriel

The Sonic Dawn - As Of Lately