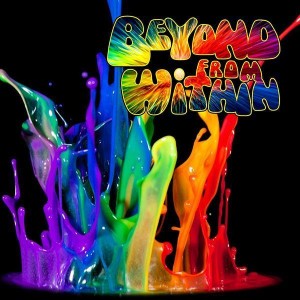 Hailing from Pittsburgh, Pennsylvania, the trio of Beyond From Within are making their debut with this album (though the band itself seems to have been cooking for a few years), which works from a base of easy-going psychedelic rock while spinning in touches of garage rock and '60s pop.  They do a convincing job of emulating that era, with twists of guitar tone, smooth-flowing wave undulations, and strong drumming (usually laid-back, but rising to fiery heights at times) joining the mellow vocals for an experience that channels its influences to impressive effect.
Virtually all of the songs are compact in their execution, and though they don't really give the impression of following set formulas, each one pulls off its vibe with a conciseness that makes for a weird fit with the psychedelic flow.  Only three of the dozen songs on the CD break the four-minute mark, and personally, I would have liked for them to cut loose into some more sprawling cuts once or twice.  At the same time, that doesn't feel like something that would necessarily fit with their song-writing process at this point, and it's surprisingly easy to sink into the whorls and valleys of the songs, even as short as they are.
The way the band works together in the songs adds a lot of charm to the music, with the relatively simple workings of a usual three-piece put to more obscure purposes here, in the sense that the swirling tunes and effects make it feel as though there's more players present, with what you heard a moment ago not necessarily being what really happened.  In effect, it's a genuinely psychedelic array of music, and the group deserves big props for being able to tap into and deliver such an authentic slice of early psych rock, something made all the more impressive by this being their debut.  For fans of classic psych, it's a treat that they should be sure not to miss.
~ Gabriel

For Fans Of; Honeysuckle Mantra, The Kaleidoscope, The Moody Blues, Southwest F.O.B., Tommy James & The Shondells

Beyond From Within - Darkest Before the Bleedin' Dawn (320 kbps)