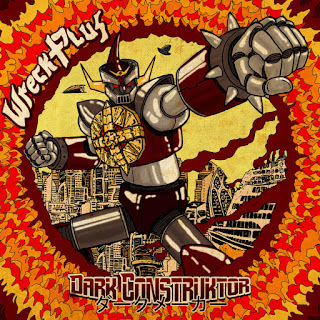 “YOU'VE JUST STEPPED INTO A TIME MACHINE, AND IF ALL IS RIGHT... WELCOME TO 1976.” Feels about right, coming out of Paris France these guys do a 70s thing well more on the Horisont side than the Graveyard side if you know what I mean. Production is top notch with buzzy fuzzed out guitars and heavy on the refurb vocals (with a scream!). This is pretty much what I wanted from Truckfighters but they haven’t scratched that itch in a while. First track and title track “Dark Construktor” sits somewhere in the Vol. 4 era of Sabbath era tunes but this isn’t close to worship. It’s not exactly grand funk either which makes the band interesting. They’re obviously gunning for the 70s throwback thing but there’s a lot of unique stuff going on in to pull you in right off the bat. The crazy breakdown / ballad thing that happens 4 minutes into the first track gives you hints of how expansive this little EP really is. Second track roles right off the bat adding a little low end to the mix and letting the rhythm section shine a bit more. A change in vocal dynamics even gives it a bit of an Alice in Chains sound (just a hint). Things take a darker turn and we’re treated to some pretty cool dark choir vocals under some nice high riffage (and later high gloss organ!) Intermission “Arturia: Stellar Blacksmith” is heavy on the synth setting us up for the second half of this EP. REALLY nice touch, I feel like I found some old laserdisc that’s about to pull me through my TV and into the 4th Dimension. Leading into Starcrossed Lovers which almost has a Deep Purple vibe to it heavy and straight forward with a high squeal. Closing track “Esoterhythm” closing things out with some thunder. Heavy on the cymbals and heavy on the high riffs Wreck Plus play us out with a bang. I’m hoping these guys follow up with a concept full album, the attention to detail is fantastic.
~ Dan