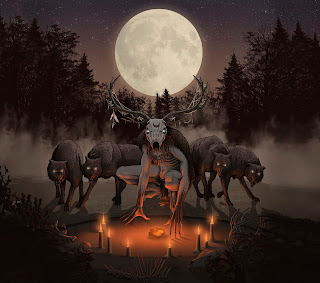 Having last heard from MotherSloth with their first full album, Moribund Star, back in 2014, I was thrilled to get word that a second album had been assembled, and that the band had joined Argonauta Records for its release. And with a helping of six full-sized songs, MotherSloth are showing off how they've grown in the years since their last release, with a tight sound to their playing that doesn't compromise the expansiveness of their doom-soaked sojourns.
The bass is nice and thick, but with appreciable texture to its waves, while the guitar fills in dozens of tense curls and turns. As the drums lay down firm beats, the vocals find a space somewhere between the clean melodies of the '70s and the rougher standards of today, wrapping the human presence up in a cloak of ominous down-tuning. On the down-side, they're sounding less cosmic than they were on Moribund Star, with the touches of spacy psychedelia to the tone-weaving being practically absent this go-round (though “Doomsday Cyborg” gives it a bit of incorporation into the more grounded form). Things are more definite now, without room for ambiguity, and while I'm sad to hear the previous style abandoned, I can't say that MotherSloth do a bad job with their new direction.
Most of the experimentalism in Moon Omen lurks in the details of the production, with back-mixed spoken-word touches, channel-sliding, and other subtleties adding a surprising depth of material for careful listeners. The cymbal treatment works especially well with the band's sound (check out “Wish for Dawn” below for a great example), and all in all, it sounds like the band is nice and comfortable with their musical development.
~ Gabriel