Rising To The Sun... 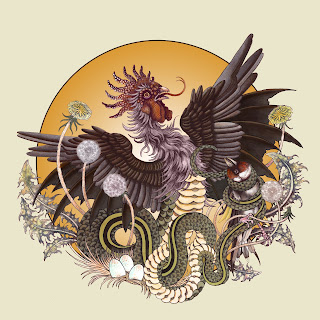 When we last heard from Brume, it was a couple of years ago, when they brought out their debut album, Donkey. The craggy bass-lines and deep valleys of beats have shifted with their new album, Rooster, moving to swifter tempos, a more intense general energy, and a more experimental approach to the song-writing. The vocals, which were a high point of the first album for me, have also received some tweaking, with some fun use of multi-tracking allowing Susie McMullin to sing against herself, swirl about, and slip verses in on the trailing sustains of their predecessors (check out “Harold” for some clear examples, or closing track “Tradewind” for some sharp soulfulness).
Maybe most noticeably, the drums move about much more, and while I didn't have any complaints about the action they offered in Donkey, I have to say that Rooster brings a wider scope to the territory Brume as a full band are able to cover, performing with high style all the while. At the same time, they've still got a handle on the psych-infused doom of their first album, with plenty of satisfaction for that vein streaming through tracks like “Calling the Serpent's Bluff” and “Tradewind”, and the savoring of that becomes all the richer for being something they've decided to hold close in the context of the band's expanded palette. Using the sophomore album to redefine their sound without losing what fans latched onto in the first album is an act that relatively few bands are able to pull off, but Brume have done a more-than-solid job of just that in Rooster. Fans of doom, go into this without building too many preconceptions; just do yourself a favor, take some time when you've got an hour to spare, and check it out in full.
~ Gabriel