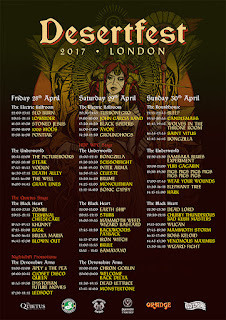 To say that Desert Fest 2017 began as it meant to go on would be an understatement.
Having dropped a good quarter of my supply of Salvia extract while waiting for the train to London was, in retrospect, not one of my most stellar ideas. Dealing with the rush of blood to the back of my head while the train thundered through the Great British countryside, took all of the fortitude I could muster. Then being met with the pulsating and undulating face of a stern ticket inspector demanding some kind of validity for my presence. After what felt like an eternity staring right through his beady little eyes, the penny finally dropped and I understood what he was actually wanting from me. I cautiously opened my bag and began scurrying around, before proudly reemerging, ticket in hand and a with a smug look of satisfaction on my face. He looked me up and down one final time before handing me back the slip of paper and wandering off back down the carriage. Relieved, I waited a few minutes before delving back into my bag to assess that my mobile pharmacy was still intact.
1 x bag of weed
1 x bag of Salvia
1 x bag of Mimosa
100 x Hawaiian baby Woodrose seeds
1 x small bottle of ether
2 x large handfuls of mushrooms
75cl of Jim Beam
20ml of Salvia extract
20 x Lucky Strikes

I figured that if I’m going to finally see Sleep live, it has to be done righteously.

Other than the awkward encounter with the ticket guy, the journey down was relatively uneventful. I occasionally scribbled in my notepad while I listened to Mountain Witch Scythe and Dead Horse and The Heavy Eyes. I’d elected to sit in the quiet carriage as I figured I’d either drop something or start drinking disgustingly early in the day. At some point around Milton Keynes some wretched little bastard of a child began running up and down the aisle banging on the chairs. It quickly gave me bad vibes. I recall sticking my out and scowling up and down between the seats for saying “Doe’s this little prick have an off switch?!”. A brown haired woman in a tracksuit glared back at me a few seats down.
I didn’t see or hear the kid again until we pulled into Euston.

I always hate this part of the trip. The long trek up from the platform into the station. In the crowd. Either behind someone who doesn’t understand the whole stair/escalator etiquette or someone who just can’t physically cope with the simple task of walking in a straight line. My fuse is too short for this city. I put on Cancer Bats Hail Destroyer, punch the open door button and burst out onto the platform. As my foot hits the ground I realise I’m in the very last carriage. Whats more, I’ve just spotted that little dickhead child a good 10 meters in front of me. I put my head down, turn my music up and charge up the ramp and towards the underground. I slyly topped myself up with whiskey before I made the journey down towards the Northern Line. As I navigated the underground in a slightly bewildered state I recalled the worlds of a great man - “Go to London, I guarantee you’ll either be mugged or not appreciated”.  For the best part, I agree with this statement. I’ve had predominantly good times here, but I’ve always been happy to leave. I woke up in Croydon once. That was pretty shit as I recall. To this day I’ve still no recollection of how I got there. I also fell out of a moving van, while on the way to play at a venue called the Purple Turtle. That being said, the same night the guy who drove us down strolled into an alley to take a surreptitious leak but was bet by a group of big black guys. They wouldn’t let him leave until he smoked some crack with them… I guess I got off pretty lucky.
When I finally got to Camden I was met by my mate who took me straight over to get my various wristbands and passes. The kid asked for my arm, which I outstretched, and he immediately slapped the first paper band on, sticky side down and onto my hair. “Oh, you bastard” I said. He ripped if off and tried again, leaving a perfectly square bald patch on the back of my wrist. This wound me up more than it should have, so I made a B line to the Black Heart and grabbed a Jack and Coke before heading off to find someone who I knew and a well deserved smoke.

Grave Lines opened up the weekend’s proceedings with aplomb. Striding out onto the Underworld’s stage like they were the home team, which to be fair would be a safe assumption. Between them they’ve all faced that underground crowd, in one iteration or another, more times than most. So this wasn’t unfamiliar territory.  Launching straight into Drug Cold - as slow and sombre an affair as they come, the quartet immediately began laying waste to the now packed room with a sonic down-tuned thunder that’s only usually reserved for the most seasoned of acts on the three day bill.  Having consumed a healthy amount of ale prior to trudging down the stairs to the venue, followed by another few back stage beers and the odd joint, my well oiled state was now trying to focus on the band themselves. With bass player Matt, lurking in the shadows at the far side of the stage, all I could occasionally make out were his dreads thrashing back and forth and catching the light, like the tentacles of a Kraken lashing out of the gloom. I made my way through the churning crowd just as Blind Thamyris hits it’s stride and Jake bellows “You’re a parasite…” and I’m met with the full force of the band’s unwavering aggression. As I make my way back to the side of the stage I think back to the last time I’d seen a band unleash this much bone shaking doom and ferocity, and the only show that comes to mind is Eyehategod, back in the mid 2000’s sometime. There’s something that they both share that I can’t quite put my finger on while I’m in this state. Something unbendingly dark and sinister. Just as I get back to my place I catch Julia splinter one of her sticks and in the same unwavering stride pull another up from beside her. It’s sums up the set perfectly - like entropy personified. Everything feels likes its being destroyed. Crushing bass, ever slowing riffs and the deliberate dismantling of the audience’s soul, and they seem to be loving it.  As Cronus Chain ends and the set draws to a close a half naked Ollie raises his guitar to the ceiling like a battle weary Norse making an offering to Thor. Before lowering it back down and turning to face the amp and unleash what can only be described as a spleen bruising amount of reverb. As the roar begins to subside and the Orange amps draw a sigh of relief I soon realise I’m all but deaf on my left hand side. Wincing and shaking my head I turn around and notice no less that five or six other poor individuals who neglected the use of ear plugs, all with one finger waggling in their ear and moving their jaws from side to side. All trying to regain some sense of equilibrium, as they stagger back towards the welcoming glow of the bar.
Round one goes to Grave Lines.

The rest of the day descended quickly in to a bit of an intoxicated blur. I referred to my garbled notes…
“Drinking with Jason and Lisa from The Well. Missed 1000 Mods and Pontiac but super nice folks”
“Explained to one of the guys from Vodun why it wasn’t sensible to wonder around here with no shoes on”
"Lost cigarettes".
“Why you so expensive London!?!?!” - I think I’d just bought a round
"Don't take the ether. Don't take the ether. Don't take the ether".
“Who’s the person who keeps on running on stage during Slo Burn!?”
“We shouldn't have huffed that etherrrrrrr”
“Cymbal Decapitation” - ??
“Ate a whole pizza and wings” - I have no recollection of this