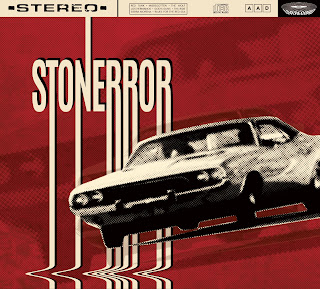 It's been about a year since Stonerror's debut EP, Rattlesnake Moan, but the Polish group has finally returned with eight new tracks of fuzzed bass foundations, groovy beat embellishments, snazzy guitar-work, and smoky vocals. Star-eyed psych and headbanging rock come together with tasty results, with some flavors like late-'90s alt rock providing an extra dose of ear-hooks for the melodies. The album moves fast, swaying and dipping through the down-beats and drifting warmth of the songs, and while it doesn't have the stylish dark tones of the group's EP, it's by no means a step down in quality.
Stonerror seem to have hashed out some of their weirder tendencies in the assembly of these tunes, finding something both more stylistically consistent and more upbeat, and calling to mind the sort of cozy musical blanket that you can just wrap yourself up in to while away an afternoon with a smile on your face. At the same time, they bring plenty of energy to bear in the songs, jamming in wild rock break-downs and tangled psych bridges, playing with tempos and time signatures, and generally having what sounds like a great time creating their music. One to blare through your speakers whenever you need some pick-me-up vibes, Stonerror also raise the question of whether their next release will be as much of a switch-up in their song-writing approaches as this one was to their last.
~ Gabriel