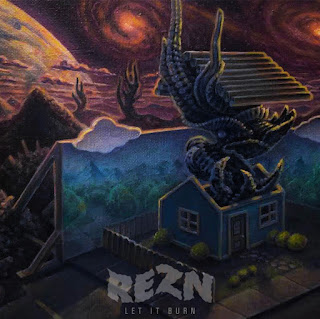 Making their debut with this album, the Chicago-based REZN (subtle, yeah?) touch down with ten tracks of spacy psychedelic stoner doom, trading in thick and heavy bass waves, tripped-out vocals, and effective use of drony tones to build some songs which carry a sense of immense weight and oncoming destruction. While the undulating distortion of the vocals can make them difficult to decipher, the way in which they're delivered makes it easy to pick up on their Sabbath-like crooning of doom and dread, and groove right along with it.
Thankfully, the band doesn't rely entirely on the common 'throw bass at the speakers until it solves everything' approach, as they show some nice tunefulness among the low-end swells, with tracks like “Orbit” and the back-to-back “Dread” and “Rezurrection” demonstrating the handle they have on melodiousness to go with the volume (with the last of those even bringing in some sitar-like strings for a taste of retro psychedelia). Interconnections between the songs step up the band's style even further, and the circling back through early song territory on their way through the rest of the album adds a neat sort of hypnotic time displacement to the experience.
All together, it's an impressive debut album, one which shows the band having a solid grip on their current style, but with room to grow on future efforts. The experimentation and riff playfulness provide strong points in REZN's favor, as does their tendency to work in some interesting atmospheric touches, and I'm urious to see how they'll change things up with their next release. Fans of heavy psych and space doom should check this crew out, the sooner, the better.
~ Gabriel