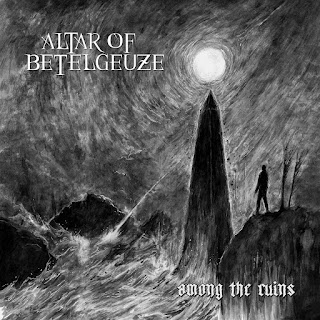 Altar of Betelgeuze have been picking up plenty of acclaim for this album already, but the constraints of time being what they are, we've not yet had a chance to feature them here on The Burning Beard. That long-running mistake is now corrected, and the seven tracks assembled by the Finnish quartet for Among the Ruins decisively show that all the hype is founded on worthiness. Mixing sludge, doom, heavy rock, death metal, and more, the group goes for a free-rolling trip through heaviness and taut grooves, generally feeling more warm than vicious, but keeping a sharp edge to their instrument tones and performance.
Though over half of the songs break the six-minute mark, the album rarely feels as though it's dragging, thanks to some tight use of melody shifting and clever bridge twisting. There's enough variety to the moodiness that while it initially feels like a summer head-banger, the anger and snarls could work just as well in a depressive winter context, so there's some all-year value for you. And while the descriptions of the musical style mix had me expecting (unfairly, I admit) some Acid Bath-like mania, AoB keep things on a comparatively tight leash, spooling out their transitions in a form that can be followed without too much trouble. The road to the end comes with its fair share of bumps and bruises, throwing itself between wild and measured expressions, but on the whole, it's a trip on which listeners are invited to ride along with the band. Throw it in your deck, play it at high volume, and take it as it comes.
~ Gabriel