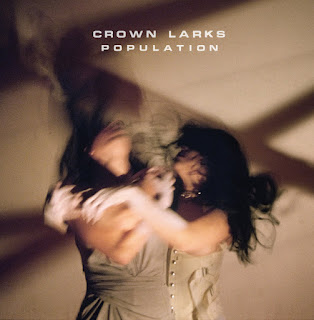 Having established themselves with a debut EP in 2013 and their first LP two years later, Crown Larks are back after another two years to further adapt their flexible musical style. Where Blood Dancer was a funky fusion of dream pop, space rock, and jazz (with a few more odds and ends stirred in), Population bends things further by ramping up the psychedelia into echoing outbursts and roiling riffs, letting things flow from there as the other influences settle in where they can.
This leads to bouts of prog meshing with world music, heavy psych dovetailing into orchestral shoegaze, and hot jazz brass bursting out of drone-underscored drum solos. But with the dream-like atmosphere that coats the music, they somehow stitch it all together in a way that not only works, but flows from one section to the next with unpredictable impulses that always seem just on the verge of losing balance. It's a strange ride, but one with a lot of appeal, whether you're digging the ambitious combos, bobbing along with the wild beats, or just zoning out to the stream of sound. Check it out if you're down with music that blurs the lines and expectations, but be prepared to invest more than a few sessions with the album before you can really pick out everything that's going on within it.
~ Gabriel