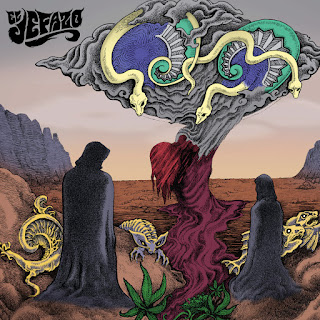 With their first studio album, the Peruvian group of El Jefazo come out packing some mean heavy rock with a psychedelic strain, letting their strings snarl while the drums lay down some hard grooves. Twists into pedal effects add some extra panache, and while they're fun little bursts, the music is solid enough (and the band's confident enough) that they're not allowed to rob focus from the powerful riffs, only to kick things up when they need that boost into wilder riding.
The group keeps things instrumental for this batch of six songs, freeing them from having to stretch measures out to cover verses, and a lot of that freedom is used to focus on ramping up from a base riff to a more intense form of it (my favorite example of this being “Rio Tinto”). But the psychedelic element is more than just some flange on the guitar; while things are certainly heavy, they're also pretty damn spacy at times. Stuff like the double-down grind of “Megalodonte” shifting into slow-melt sustain shows how adept the group is at bridging those two sides, but they use that play sparingly enough to keep it fresh when it does arise. The expansive close-out of “El Cañón de la Eternidad” simmers it down to a fine finish, and all around, the band's first full LP is a satisfyingly diverse and ambitious effort, with plenty of raw energy evidenced in the playing. Here's hoping a follow-up emerges before too long, as I'm really curious to hear what other ideas this group has rattling about in their strings and skulls.
~ Gabriel