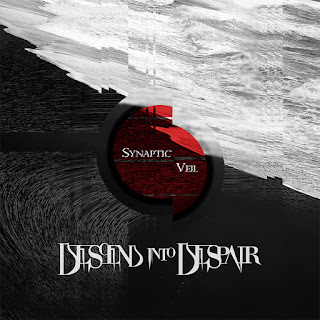 With their second album, the seven-piece Romanian group of Descend Into Despair have delivered a monstrous mass of funereal doom, broken into five uneasy pieces for slow digestion. A variety of vocal approaches complement the broad range of instrumental tones and techniques, with slow-boiling rage, desperation, despair, and anguish brought to light over the course of the album. There's a bit of an early Opeth feel at times, though more grounded, not only in terms of solos and riff expansion, but in the balancing of instrumental work as well. The guitars don't run off with the show, as all of the members have vital parts in developing the atmosphere and musical punch. Most of the album can't really be pinned to any one band for comparison, but the fluidity and general vibe did have my mind flashing on the Hungarian group Dreamgrave, whose sophomore album Presentiment managed a similar sort of sprawling darkness with points of gentle exquisiteness.
There's such a sense of careful construction to the songs, with their shifting inner structures, that it occasionally feels operatic, or at least just majestic. The ringing out of individual notes allowed full focus, the undercurrents of swirling bass, assemblages of quick-turn dramatic breakdowns and hard impacts, and on and on... DID have turned out an excellent and impressive album here, and having it be just their second full-length points to a compelling future for the group. Fans of ambitious metal that doesn't allow itself to be boxed into the usual traditions, do yourself a favor and get a copy of this album, then set aside some time so you can listen to it with full attention. Damn good.
~ Gabriel

For Fans Of; Dreamgrave, Funerary, Temple of Gnosis, Thergothon, A Thousand Sufferings

Descend Into Despair - Alone With My Thoughts (320 kbps)