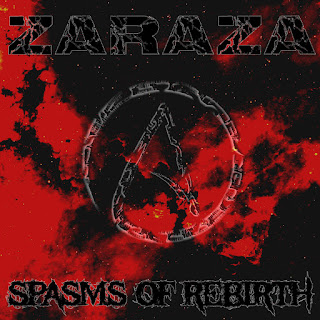 It's been a while since Zaraza's last album. Almost a decade and a half, actually. But with the two-piece's return, they show themselves to be firmly on top of the filthy sludge/doom (with a few industrial slams) style as it lived in the mid-'90s days of the band's birth, when Godflesh, Fudge Tunnel, and others were slogging away at the height of their powers. The blear of feedback from bass, the clang and punch of the drums and cymbals, and the snarling gutturality of the vocals come together in a nasty piece of work that's pretty damn compelling in its slow-moving roil of dissonance and dirtiness.
The slow-burn dredging of the instruments gets a lot of focus over the course of the album, and accordingly, the sustain on the strings is matched by a wide impact from the drums. It feels big even while building up to the outbursts, and the weighty crashes from both sides do a great job of hammering down listeners who've got it turned up to suitable volume. There's shades of early black metal to the seriousness of the lyrics' promises of violence (not to mention the buzz-saw grinding), most pronounced in “Blood.ov.Psychiatrists” and its nasty gnashing. Over the whole of the album, there's a grimness that tends to be lacking from most of the modern sludge emulators, and the songs practically drip with miserable abandon, so while there's not much range to the tempos, the heavy oppression of the music draws in enough variation in other aspects to squarely hit the mark. Mean, heavy, and almost unbearably slabby, Spasms of Rebirth firmly reestablishes Zaraza as a force to be reckoned with on the less amiable side of sludge.
~ Gabriel