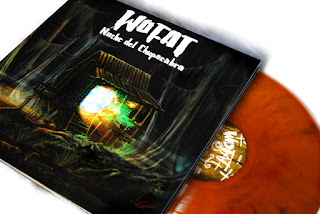 The kings of the riff are back, Wo Fat's Noche del Chupacabra is finally here! Now I've been waiting for this album since the day it was announced, so when it turned up on my doorstep on Tuesday I tore into the packaging with furious impatience. When ever I get this way about something I've been waiting for I almost always get sudden wash of worry flood over me. Theres always that underlying doubt that it wont live up to the expectations you've been dreaming up for the last god knows how many weeks...
Wo Fat's second release Psychedelonaut instantly became one of, if not my favourite album of 2009, and how could it not be? Huge storming riffs coming one after another and enthused with the all psychadelica and groove the title implies. So it makes me rather ecstatic to report that any niggling doubts I may have had were quickly extinguished within about 10 seconds of the needle touching down on the wax. Further more all expectations were promptly trumped from track to track. Nothing lets up for a second, all the now trade mark Wo Fat elements are still there. Mammoth lead guitar churning out epic riff after riff, fuzzed out bass and down tempo drums topped with Kent's echoing vocals. Just like Psychedelonaut every song so enormous its still hard to believe the band is only a 3 man operation.
My only mild disappointment is that unlike the last release there's no download card. A petty gripe really but still, I honestly cant rate this album high enough. It may only be January but I honestly cant see much on the horizon to knock this off the spot of my favourite album of the year. But like said when I posted about their previous album, if you don't believe me go find out for yourself! I promise, you wont regret it!
• Label: Nasoni Records