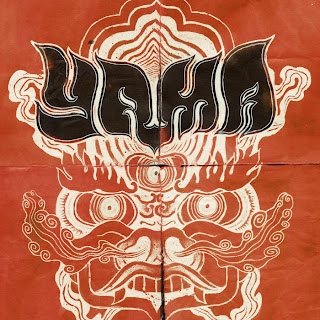 Straight from the get go you're able to grasp where this demo is heading. That may sound a bit like a dig or a criticism but its really not, far from it in fact. I've always maintained that if an album or demo can grab you within the first minute it will, 9 times out of 10 hold you for the full length... and thats what Yama have managed to pull off here.
Alex's distant ghostly vocals intertwined with a somber guitar lead set such a great opening tone you can't help but want to listen on. Like its the quiet before the storm and something's about to erupt. You'd be right too. The tempo soon picks up and the blues influenced desert rock riffs start flowing. By the second track Seaquake an equally haunting harmonica is also thrown into the mix and is the highlight of the demo. The tracks intro is so dark and tortured you're totally drawn in so when the oncoming wave of 70's fused southern rock guitars hits you're completely taken off guard. It real stuns you. But if that wasn't enough, the guys once again turn the tables half way through the 6 1/2 minute track and abruptly hit you full on with a unique blend of blues and (almost) thrash. It's strange and unorthodox but hell does it work!
These guys have gone right to the top of my list of bands I'm eagerly awaiting a full length album from.

Three tracks of superbly belting, fuzzy goodness. One hell of a demo!