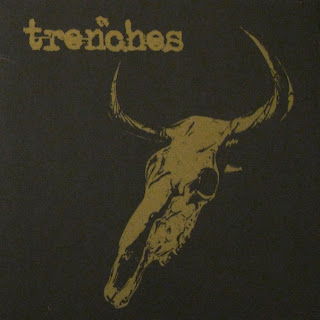 We caught Trenches absolutely demolishing a pub in Coventry recently. It was an epic sight to behold, three guitarists, bass player and drummer crammed on a tiny stage with singer prowling and screaming his guts out offstage. The wall of sound from the three guitars was deafening and the experience was cathartic, at the very least. So how do they hold up on record?

Frighteningly well, is the answer. Opener ‘Carrier’ is a short but sweet statement of intent, all taut guitar lines and sludgy passages, chuggy tempos recalling Dopefight and screamed vocals straight out of the bat. Intelligent tonal harmonies add texture and the song ends with a lovely almost post rock crescendo, before ripping into ‘Vices’, the undoubted jewel in the crown of this EP. Absolutely brutal, drawing out influences from the hardcore scene with fast sections cutting into groove based riffs, topped by a powerful growl. About a minute or so in appears a discordant riff that Norma Jean would be proud of, before the song disappears into full on down tempo sludge territory. Intelligent use of layering and harmonies born from the use of three guitars adds real texture and makes this a joy to listen to. ‘Bloodbubble’ is similarly nasty, conjuring comparisons with Hang the Bastard and Neurosis, especially where the band break out into an atmospheric, almost post-metal led middle section, before bringing back the sludgy noise to finish.

All in all, this is a great record that everyone should check out. It’s brutally heavy but not afraid of bringing in some lovely guitar work to add tone. There are some great riffs and evidence of intelligent song structures, something that is sometimes a bit lacking in this genre, it’s a refreshing change to hear. Even better, on the evidence of the new tracks performed on their recent tour, the new LP (due in September) is shaping up to be even better.

For Fans Of: Eyehategod, Buzz•Oven, Lair Of The Minotaur, Dopefight, Five Will Die