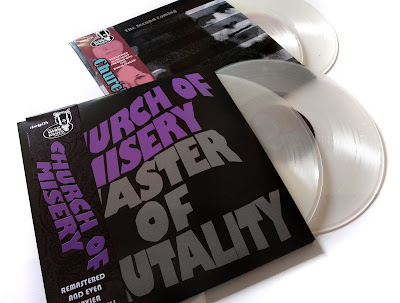 Finally! It's here...
I initially got word of the repress of Master Of Brutality when talking to Tatsu late last year. It was all a bit hush hush and nothing was set in stone at the time, but nevertheless I was excited. So when it was annouced within the first few months of the year its was definitely going ahead along with the repress of Second Coming it was music to my ears. The initial release date was for around May time, that then got pushed back to June, then further on to August then finally, just last week, after months of daily checking it eventually popped up on the Rise Above website.
Unlike the repress of Volume 1, nothings new in the way of the mix of either recording but then both original versions of the LP's were pretty much spot on anyway. What has changed is the addition of bonus tracks spread over an extra disc each as well as the covers. Where the original Masters Of Brutality vinyl came with the John Wayne Gacy cover inside of a cardboard envelope, they have this time opted for the Sabbath homage. As for the Second Coming cover, nothing actually new, instead of the original LP's simple orange paper Ted Bundy adorned sleeve they have actually used the cover that Salvation Records used then they repressed the cd back in 2005. Either way, both look great.
There's not much point going into detail about the albums, if you're here then you'll know Church Of Misery and how awesome they are. If by what ever reason you don't, well then just go hit the links below and have your mind well and truly blown!..

By the way, I managed to order a few copies just minutes after they went up on the site. Within 48 hours all of the clear vinyl super limited editions had gone! So you may just have a problem getting hold of these ones...