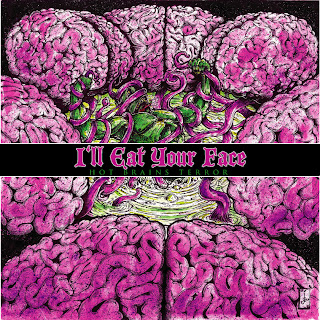 Barry from the band hit me up with a copy of the new album Hot Brains Terror over a month back and straight from the outset I knew it was bound to be something a little different... Two piece Irish grindcore band featuring ex members of the awesome Alter Of Plagues and For Ruin... Of course it was going to be something special, that was a no brainer (no pun intended). Plus being a big Agoraphobic Nosebleed and Discordance Axis fan it was bound to give me a certain degree of listening pleasure. But everyone loves a bit of grindcore right? Of course they do, and this album certainly won't change that. Hell, Jay Randal would be proud of this record! Break neck drum beats and furious guitars are the order of the day. But don't worry, its not all just mindless violent noise, yeah ok, I know that wouldn't be a bad thing, but IEYF have kind of pushed the boundaries a little by incorporating touches of genres not usually associated with the grindcore scene. As the album twists and turns you're met with elements reminiscent of black metal, thrash, punk, hardcore and hints of drone. I'ld like to think that if Pelican, Converge and Sunn O)))) got together to start a grind band the end result would be somewhat similar. It's immense, frantic, sombre and ever so beautifully mentally warped... I love it!

Now this little baby goes up live today, so as soon as you're done reading my drivel head over to the bandcamp page and download it. The guys are also being kind enough to give you an option to pay what you want for it, so dig deep you tight bastards!