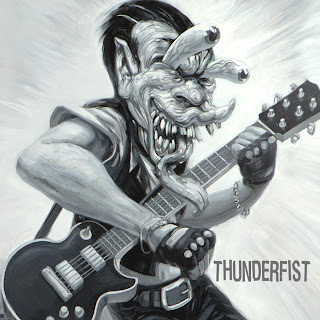 I've said it before I'll say it again; There really hasn't been many great things to come out of Salt Lake City. Mormons, High School Musical and The Used... Yup, their track record isn't so great really. But, and this is a big but, they are redeeming themselves somewhat, firstly by giving us the mighty Top Dead Celebrity and now Thunderfist.
In fact the guys are practically brothers, having known each other for well over a decade and even loaning Jeremy to TDC for live shows and working on last years epic album Midwestern Rube. Most of the band hail from Utah’s west desert. Growing up on a healthy concoction of motorcycles, fixing cars and being harassed by rednecks, rock and roll was always gonna course through their viens. They were actually later embraced by the rednecks (and some would argue became rednecks) as they were the only connection for LSD in town (seriously!). Hicks on drugs became the center point for a lot of Thunderfist parties throughout the years. The band started simply because of their love of all things Rock and / or Roll and to keep themselves interesting to the ladies. Worthy reasons if ever I've heard any! So now, 14 years down the line and they're still nailing it. Thie song Cut and Run pretty much sums it all up. I don’t think (and I quote) bass player ‘Metal’ Mick Mayo has seen the same vagina twice in his life... So thats Thunderfist in a nutshell. They love it loud, dirty and more often than not, illegal.

Thunderfist have worked with Jack Endino on the past two albums (Loud, Fast, Rock and Roll, and Too Fat for Love) but scheduling conflicts got in the way of a third rock and roll collaboration. So on this outing the reins were handed over to the bands guitarist Michael ‘J’ Sasich. Considered a rock mentor, Jack fortunately taught Sasich many tricks of the trade and although he'll be missed Sasich really brought home the bacon on this one. Big time. Recorded in the winter of 2011 in Salt Lake which as you all know is the home of backwards religious fruitcakes and bad reality shows. None of Thunderfist are married to a sister wife or wears white pajamas under their clothes. In fact I'm obligated to point out that all of their undergarments are torn and dirty from too many nights of Rock and Roll in pretty much every shitty dive bar in North America (and one in Mexico, thank you Sammy Hagar, haha) Anyway, they're all proud worshippers of vintage Marshall amps and Les Pauls... and Krom... and beer. Which lets face it, is nothing short of a winning combination. But striving for perfection and in order to get the sound entirely spot on they actually had to record the album twice! But they're proud of it and so they should be! It's a hell of a collection of songs, touching on how they don’t like Eskimo pussies being cold - Eskimo Pussy is Mighty Cold. Relationship songs - None of Your Business, and probably the most epic of their catalog; the mighty Wizard’s Lament. On the which there is a Horn of Gondor and a Monty Python reference all in the space of 5 minutes! Now tell me thats not Genius! But the excellence doesn't stop there. Oh hell no! With subtle nods to classic rock, punk, the early days of metal and southern rock the whole album is a tour de force of heavy rock excess, balls to the wall whaling guitars and altogether catchier than a bout of the clap from a Mexican brothel. Deep down dirty and sleazy... you'll love it!

Hit up their Reverbnation page for some free downloads or man up and buy the whole album here.