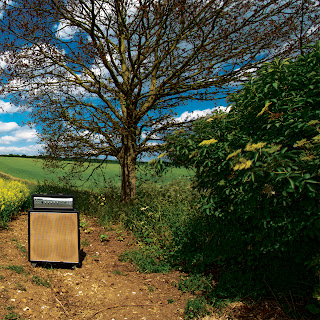 I love it when we actually get sent a physical copy of an album by bands, it somewhat reaffirms me that not all the music we deal with is harshly compressed and digitalised in some way. I like that. But what makes it all that much better is when you listen to the band and utterly love them within the first 30 seconds. This is the sort of effect that fuzz fanatics Stubb have on me, and if you're a fellow stoner psych enthusiast then they're bound to have the same result with you. If not then I'd hazard a guess there's something seriously defective with you.
So whats so great? Well... Thicker and heavier than a skip full of tar, its pretty easy to tell that this record was laid down in that time old and traditional analogue fashion. Good on them too! It's about time more bands started back pedalling against technology, to an extent at least. It just undoubtably sounds a whole lot better and this album is a perfect case in point. The majority of tracks are saturated in an awesome aura of fuzz, but where some stoner bands tend to rely on this as a subtle distraction to not a lot else going on, Stubb don't. Far from it in fact, because layered over the top is a constant and dominant wave after wave of classic rock influenced riffage. Sounding like a down tuned modern day Cream, each and every riff and lick is not only technically great but ridiculously catchy right from the opening track Road. The album looses pace a little at track 5 Crosses You Bear - an acoustic folky ballad number, but 2 minutes later the pace picks up where it left of and thunders into (for me) the best track of the eight; Hard Hearted Woman which seems to possess every classic rock element you can imagine. Fast stormy riffs merging into whaling echoey solos, tight bass and drum lines and vocals about debaucherous evil women.
So how much do you have to pay for this awesomeness? Well, if you're tighter than a ducks butt; nothing. But if you actually have a brain in you're skull you can and should pick this record up on the format it was truly born for. Yup, the good ol' chaps at Superhot Records have gone ahead and pressed an unspecified number on vinyl. I don't imagine they got a massive amount made up so I'd get one ordered sharpish!...
I have.