Running On All Cylinders... 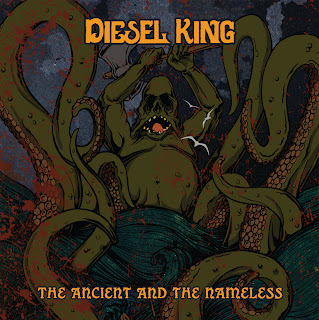 We love a bit of home grown sludge here and we do get a fair amount of it sent in. Everything we've received has always been top notch but (and it does pain me somewhat to admit this) it's never quite been on the same par as the yanks offerings. But I think thats more down to the fact we've always put our own little nuances and local influences into our own versions. But thats only to be expected really, baring in mind the bulk of the genre came/comes directly from New Orleans. It was always going to be a pretty unique product of its environment, much like the early days of Blues or the early 90's 'Madchester' scene. But what we have today is a close to a true NOLA band as you'll find outside of the states. Yes yes, I know some of you will maybe groan at that thought, but don't before you hear these guys. Trust me
Diesel King got together back in 2009, formed by Mark (vocals) and Will (bass) from the ashes of their original local London bands Head On and Sedulus. Kicking things straight into gear the chaps wasted no time in recruiting 3 more guys and churning out the first demo in 2010. Something obviously clicked as before too long they found themselves opening for Corrosion Of Conformity. Not bad eh? So that now brings us to the release of their first full blown studio album.
We know they can hold their own live but how do they fair in the studio? Damn well as it goes! Dirty crushing vocals and massive chugging riffs come in bucket loads and whats better is that although they've clearly spent a ton of time and effort on the mixing they've resisted the urge to over do it and loose a lot of the edge. They've also managed to tread that fine like between balls-to-the-wall heaviness and well executed groove, much in the style of Superjoint Ritual but with the half the tempo. If you give half a rats ass about NOLA act or just any one of Phil Anselmo's plethora of past and present projects I can pretty much guarantee that you're really going to dig Diesel King. The album drops on friday so keep an eye out on the fellas bandcamp page for when it becomes available for download!