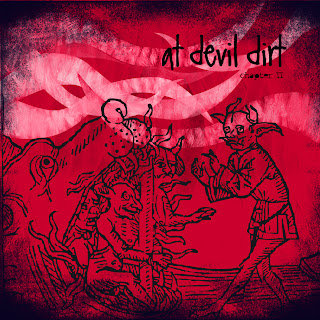 There's no two ways about it, these guys have been one of the main reason's the blog's YouTube channel has received so many views. The tracks we put up from they're self titled debut have been some of, if not the most viewed since day one, and that should tell you a lot of what you need to know about At Devil Dirt. Quality musicians making quality music. But if you missed the coverage of their first release here, then I'll bring you up to speed - It's two guys from Chile producing fuzzy yet harmonic tunes. Thats the long and short of it really.
This, their follow up to last years release takes on a slightly less gritty sound and shape. Where the last album could generally be described as quite grungy Chapter II feel's somewhat more doom driven. There is still more fuzz than you can shake a stick at, but it's a lot more polished and for want of a better word, accurate. Just from listening to the opening couple of minutes you could swear that you're put on Crowbar by mistake. The slow, driven and impending doom remains an underlying factor that ties the whole record together throughout the duration. But the strange thing is the collaboration between that doom and the almost softly sang vocals. It's different and at first it does sort of catch you off guard. But if like me you don't warm to the pairing straight away just give it a little time and hear the album out. Before too long I'm sure the penny will drop and you'll realise they do actually work really well together. The key to Chapter II though is it's ferocious clash of dirty fuzzy riffs and pounding drums. With patches of tracks echoing seminal works from the likes of the Desert Sessions, Sleep, Kyuss and Dozer it really does still blow my mind that this is the work of just two guys. What this mite lack in fast paced or reverb ridden vocals (if thats what you're looking for) it more than makes up in shear talent of composition.
Either way y'all should really give the album a blast. If you dig it you'll be pleased to know that the guys have sorted a pretty limited pressing on wax, just 100 to be exact. Up for sale now on the Bandcamp page they'll should be shipping around this time next month, so move fast!