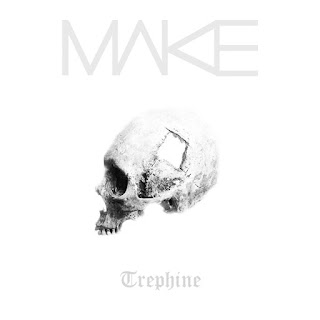 Y'all like a little post apocalyptic post metal/doom right? Sure you do. Well may I present to you, from North Carolina, Make. A trio of chaps creating some of the best dark, sombre and truly crushing tracks I've heard in a long long time. Hitting that sweet spot between hypnotically beautiful and shear haunting, this whole album really falls on the master class side of things. Easily hitting par with anything a true master of the genre, say Aaron Turner or Greg Anderson has created in the last decade or so. Echoing a similar song structure too, many of the tracks begin with a post rock (almost shoegaze in places) atmosphere. Slow drum beats backing a calm string harmonic, you know the sort of thing. Think Gifts From Enola, but then crank it up to 11 and force Isis onto the same stage. It's a real quiet before the storm approach, but nailed perfectly. Where many bands do try this method, so often one element lets them down. Either the gentle haunting side is slightly out of whack and heavy storming riffs and vocals are spot on or vice versa. Either way if one side doesn't quite cut the mustard then the whole track often winds up being a bit of a write off. Make however have managed to hit pretty confident home runs on both points. If you're a big fan of most bands backed by the likes of Hydra Head or Southern Lord then I really think this'll be slap bang up you're ally. Whats more, I have a distinct feeling these's fellas are only gonna go from strength to strength so keep a close eye on them!
Unfortunately we can't offer you anything from the album to download for free, but hit the stream up below first, sit back and enjoy. If you really dig it it's only about 7 bucks for the download. Or alternatively if you have a brain in you're nut then you'll shoot over to the guys Big Cartel page or Devouter Records and check out the lovely lovely white and grey splattered vinyl. If you are craving a little something for nothing you can have the guys live album, which is available here. That should keep you satisfied until the wax turns up.