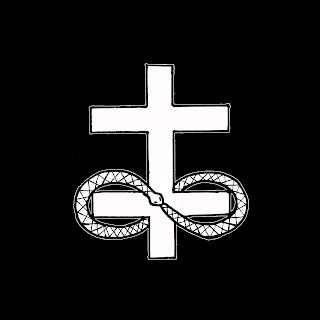 By now may of you regular visitors will probably be somewhat accustomed to my tastes in the genres that we cover. So many of you will know that toward the bottom of my favourites list as it were lies drone. Not too prior to that you will actually find doom. But not all doom, no no no. The classic sort of stereotype that lives with one foot in the drone genre just doesn't seem to do anything for me. But just like sludge, when you take that crushing power and throw some tight grooves into the mix, well then you've created quite a different beast. Which brings me neatly on to this Colorado based little trio. Taking whats sounds like all the unused, darker and slower riffs that have been conjured up from the mind of the godfather of doom himself, Toni Iommi, they've twisted them into their very own niche. Not being scared to break convention and pick up the pace a little in parts they've also pushed the boundaries a bit by letting fly when it comes to the skins too and track three; Immolation is a perfect example of this. Opening with the archetypal slow churning of guitars and distorted vocals that sound like they're bellowing straight from the gates of hell, the build up pays off in droves when Joseph lets the sticks fly and pounds the tempo up a few notches. Joined with some truly crushing riffs played though a perfect amount of fuzz and overdrive it really makes for a relentlessly compelling listen. I can't help but think that if Iommi, Keith Moon and Jim Morrison all merged, got heavily into the occult and opium then hired Anton LaVey as their manager they would have probably sounded like this. Or to put it another way; it's what Lucifer would have playing on the radio as Dante walked through the gates of hell. Dark, twisted and yet still conscious of having the good sense to break from the norm and mix it up. The elements of doom, drone, sludge and stoner rock serve as a great foundation to experiment with throwing in little touches of desert rock, classic rock and death metal. Unorthodox? Sure. Executed successfully? Oh yes!
Now you've gotta love a band that's entirely DIY, but you have to love them even more when they offer up their music on cassette, and limited to just 250 I must add. But we love them because they've really done us a solid and are letting us chuck up a couple of tracks for a free download. If you dig them show some love and pitch them a few bucks, 35 minutes of groove filled doom for less than the cost of a pack of smokes... Not bad. No bad at all.
~ Jay

Email ThisBlogThis!Share to TwitterShare to FacebookShare to Pinterest
Labels: Doom, In The Company Of Serpents, Stoner, USA