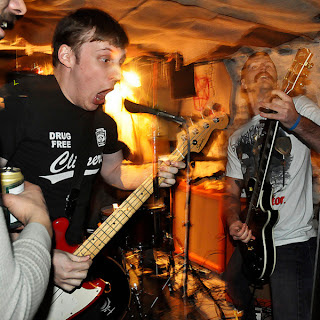 My house is the bane of my street. Honestly, I pity my neighbours. It’s all terraced housing, you see, so my excessively powerful amp rings clean and clear up and down the block with whatever spiky, noisy band I’m listening to at any given time. Right now, the band that claims the honour for annoying my neighbours the most is probably Lehunt.
Lehunt are a three piece from Kansas in the US, and they make a wonderfully taut brand of noisy hardcore. Now stick with us here, I know hardcore is not the standard for us here, but these days’ boundaries blur all the time, and this is no exception. Lehunt take the template of modern hardcore and tweak it, playing with the rhythm based sound that bands like Norma Jean and Botch pioneered and feeding in touches of chaotic noisecore ala Tony Danza Tapdance Extravaganza. Randomly, the balanced riffs bring to mind alt hardcore heroes Helmet at their 90’s best too, although I have no idea why. Nowhere is this blend more clearly demonstrated than in the EP closer ‘Black Gold, Texas Tea’, a stomper of a tune that builds on a thuggish sludgy riff, before throwing in some variable time signatures and discordant parts to throw off the listener, bringing back some solid sludgy riffage and ending on some awesome tech-noise that really reminded me of Tower of Rome.
The EP is well written, with Lehunt demonstrating an ability to write big solid riffs that make the head bob involuntarily, but also that they are equally at home with spazzy tech parts. Importantly, they can make these disjointed styles flow and work as songs for the most part, which some bands really struggle with. If I were to be picky, some of it doesn’t work – quite apart from its awesome name, ‘O god the Afterbirth’ has a picked riff which seems artificially slow, is repeated a bit too much and doesn’t quite fit with the rest of the song, contributing to the feeling that it seems a little over long. That really is being a bit picky though, the rest of the song is great.
Overall, this is a band well worth checking out, especially if you have even a passing like for latter day Norma Jean.